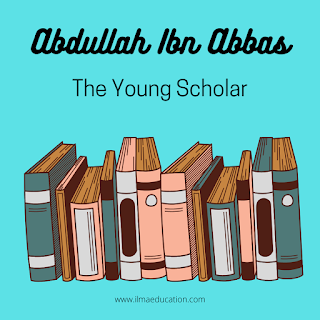 Abdullah Ibn Abbas was a young cousin of Prophet Muhammad (s) from his father's side. He spent a lot of his time with the Prophet (s) as he was frequently staying with his maternal aunt Maimunah, who was one of the Prophet's wives. He also accompanied the Prophet (s) everywhere as he wanted to learn everything he could from the Prophet (s).

The Prophet (s) made dua for him saying, "Oh Allah! Teach him (Quranic) interpretation and grant him understanding in the religion."

After the Prophet's death, when he was just 13 years old, he never stopped learning. He sought out the Companions and learned what he could about the Prophet from their hadeeth.

He was the Sea of Knowledge and was called Al-Bahr and also called Habr Al-Ummah which is The Learned Man of the Nation. These titles showed how deeply knowledgeable he was. Not only did the Companions sought his advice but also when Umar Ubn Khattab was Khalif he also sought the advice of Abdullah. Umar used to say about him, "That is a boy of great maturity; he has an inquisitive tongue and an understanding heart."

Source: 'Child Companions of the Prophet' published by Darussalam.

What Your Child Can Learn From Abdullah Ibn Abbas: